For whom the clock chimes… with apologies to Hemingway 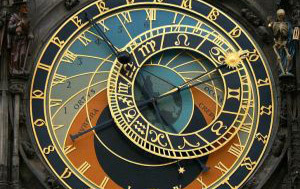 Every Sunday evening, I wind up an antique wall clock at home. Last evening, I

inserted the clock key into two winding points to wind the clock for the week, and painstakingly moved the minute hand around to set the correct time.  Then I made sure that the clock was correctly positioned. If not, the clock either runs too fast or too slow. As I did all these mundane tasks, I began to think of how quaint the whole process seemed in today’s fast-moving world, where things seem to change in a fraction of a second. And I began to think of how the process of time tracking began and changed over time.

So how did human beings first start tracking or measuring time? Ever since humans noticed the regular movement of the Sun, the moon and the stars, they observed the passage of time. Pre-historic people first recorded the phases of the moon 30,000 years ago, but the first minutes were accurately recorded a mere 400 years ago. Atomic clocks that allowed humankind to track the approach of the third millennium (the year 2001) by a billionth of a second are less than 50 years old.

The earliest time measuring devices were made to divide the day or the night into different periods in order to regulate work or ritual, so the lengths of time periods varied greatly from place to place and from culture to culture.

Our sexagesimal  timekeeping was first started in ancient Mesopotamia and Egypt nearly 4,000 years ago, Around 3500 BC, the Egyptians used tall obelisks to track the shadows cast by the sun, which helped them separate their days into two halves. They kept improving their time keeping with the development of the sundials around 1500 BC. The ancient Greek, Roman and Chinese civilizations all used sundials extensively.

Oil lamps and candle clocks were used for telling time in China. They were used to mark the passage of time from one event to another, rather than to tell the exact time of day.

And then we have the very interesting Water clock. The Water clock or Clepsydra was

invented around 1600 BC. It relied on the flow of water from or into a container. A simple water clock measures time by measuring the regulated flow of water into or out of a vessel of some sort.  Water clocks existed in Egypt and Babylonia as early as 1600 BC and possibly significantly earlier in India and China. While the clepsydra was more reliable than oil lamps and candle clocks, the water flow still depended on the variation of pressure from the head of water in the container. The ancient Greeks and Romans used complex gears and escapement mechanisms to increase the accuracy of these water clocks.

Sundials or shadow clocks which measure the time of day by means of the shadow cast by the Sun onto a cylindrical stone, was widely used in ancient times. In a typical sundial, the Sun casts the shadow of a gnomon (a thin vertical rod or shaft) onto a horizontal surface marked with lines indicating the hours of the day. It can give a reasonably accurate reading of the local solar time. As the Sun moves across the sky, the edge of the shadow aligns with different hour markings. Sundials can therefore only be used during the daylight hours.

And as we moved to the middle ages, mechanical clocks started being used. Mechanical clocks with continually repeated mechanical (“clockwork”) motion, began to be developed independently in China, the Middle East and Europe in the early Middle Ages.  They used a method of gradually and smoothly translating rotational energy into an oscillating motion that can be used to count time. They used a variety of toothed wheels, ratchets, gears and levers. Early mechanical clocks were housed in church towers or important government buildings. Early clocks did not have faces and just struck the hour for religious or administrative purposes. By the late 14th century, the convention of a rotating hour hand on a fixed dial became common. These clocks were still not very accurate and errors of 15 minutes to an hour per day were common.

Spring driven clocks began to appear in Europe in the 15th century and new innovations were developed in order to keep the clock movement running at a constant rate as the spring ran down. As accuracy increased (correct to within a minute a day), clocks began to appear with minute hands, mainly in Germany and France in the 16th century. By the time of the scientific revolution, clocks had become miniaturized enough for wealthy families in Europe to have a personal clock, or perhaps even a pocket watch.

In 1656, the Dutch scientist Christiaan Huygens developed the pendulum clock, based on the earlier ideas of Galileo, who had discovered the isochronism, or constant period, of a pendulum’s motion in 1583. The pendulum clock used a swinging bob to regulate the clock motion and achieved an accuracy of within 10 seconds per day. with this level of accuracy, the seconds hand now became possible on clocks.

Mass production of clocks began in the United States in the late 18th century. In 1836, the Pitkin Brothers produced the first American-designed watch, and the first containing machine-made parts. New innovations and economies of scale with mass production, made the United States the leading clock-making country in the world. Competition reduced the price of a clock to $ 1 or less, making clocks affordable to a large number of families.

An Electric clock, which winds the mainspring using an electric motor, was patented by Scottish clockmaker Alexander Bain in 1840. By the end of the 19th century, the invention of the dry cell battery made electric clocks a popular and mechanical clocks were now largely powered by batteries, removing the need for daily winding.

Meanwhile, the military hastened the development of the wristwatch. Most forms of communication were vulnerable to enemy interception. So the British military issued wristwatches to it’s officers in the late 19th century, so that they could coordinate activities and movements without having to communicate directly during battle. By the end of World War I, all British troops had been issued wristwatches specially designed to withstand the rigors of trench warfare. These troops returned to civilian life still wearing them, and they quickly became an indispensable time management tool for managers and workers. Wristwatches remained an indispensable part of daily life until the early part of the 20th century.

With the advent of cell phones in the late 20th century, many people replaced the wrist watch with their phones to tell time, as an alarm and as a timer. But in a remarkable switch around (and a validation of how quickly technology changes) wearable smartwatches are developing so quickly that they could replace smartphones. Smartwatches today, offer cellular connectivity and can function on their own. With a separate data plan, smartwatches can handle basic tasks – texting, emailing, workout tracking – without a phone in Bluetooth range. You can even make phone calls.

But with all the advances in technology, for me, the reassuring tick of my clock and the chimes as it strikes the hour and the half-hour signify a kinder, gentler time, when things moved an unhurried pace than ours. And I think of that immortal quote from the classic Christmas movie “It’s a Wonderful Life” – “Every time a bell rings, an angel gets his wings”….