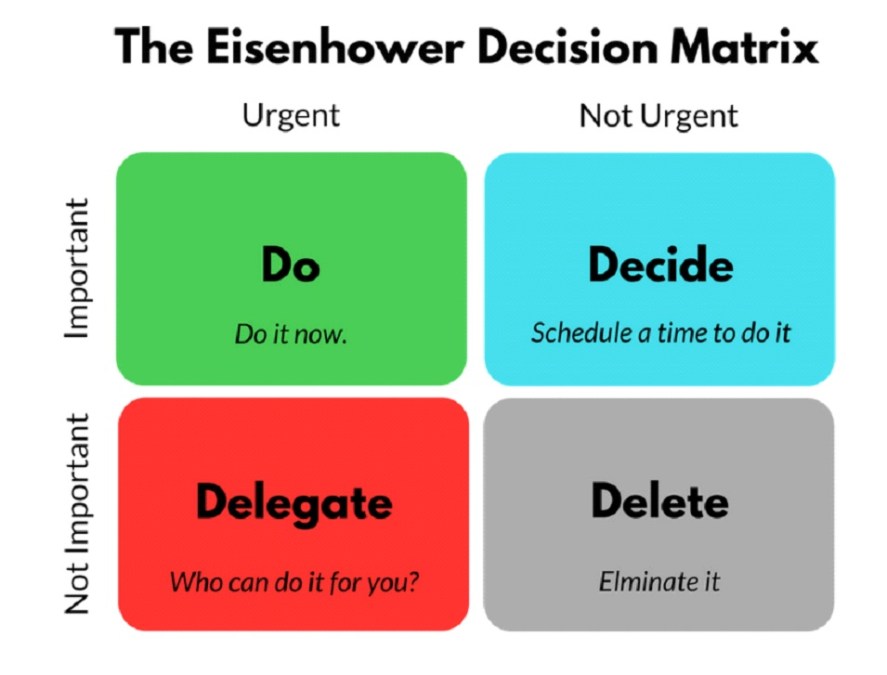 See Your Productivity Soar with the Eisenhower Matrix

The Eisenhower matrix is named after the USA’s 34th president, Dwight D. Eisenhower. Not only was Eisenhower a president, but he was also a five-star general, Supreme Commander of Allied forces in WWII, and he even created NASA. He was a busy guy who got a lot done in his life, so he knew a thing or two about work productivity.

Eisenhower had the incredible ability to sustain his productivity not just for weeks or months, but for decades on end. So it’s no surprise that his methods for task management, time management and productivity have been studied and copied by scores of people.

During WWII, the then general was quite busy with many tasks on his plate. After all, work management when commanding the forces of several nations during a fierce war will be a demanding job. So, to help him improve his work management, he devised the system now known as the Eisenhower Matrix.

The mere-urgency effect is a common phenomenon. The phenomenon is that people tend to prioritize urgent tasks rather than how important they are. So, for example, you might prioritize a Zoom call over more serious matters for no other reason than the appointment is quickly approaching. The result is that the less important tasks become neglected, thus impacting your work productivity.

The Eisenhower Matrix is also based on the Pareto Principle. The Pareto Principle says that 20% of input can achieve 80% of output if you practice efficient task management. However, most people and businesses tend to spend 80% of their input to achieve just 20% of their output. The Eisenhower Matrix helps overcome this by prioritizing the tasks that help you get the most important tasks done first.

How The Eisenhower Matrix Works

The Eisenhower Matrix works by diving tasks into four categories.

Tasks that fall into this category are prioritized to be done before anything else.

⦁ Not urgent but important

You should schedule these tasks for before the deadline approaches, but after urgent and important categories.

⦁ Urgent but not important

Tasks that fall into this category should be delegated to somebody else.

⦁ Not urgent and not important

In most cases, these tasks should be deleted. They will only take valuable time and give little to nothing back in return.

One of the key advantages of the Eisenhower Matrix is that it helps you to stop wasting time on unproductive tasks, leaving you with more time to focus on more productive tasks instead. Such tasks tend to be menial and time-consuming, making for poor time management.

Another advantage of the Eisenhower Matrix is that it helps you visualize which of your tasks is more important and encourages you to work out how important each task is. For example, if you need to know where to place a particular account, you may be encouraged to work out how much you are profiting from that account. If the account is not earning you enough money, it can be delegated to somebody in a junior position or closed altogether.

The monetary value of a particular task is not the only thing to consider – time tends to be a far more valuable commodity. However, tracking time spent on tasks can be time-consuming, which would make it counter-productive considering we’re trying to improve your time management. One solution is to use time tracking software like the PK4 TimeTracker that will help track your time automatically. Not only will the software make it easy for you to track how long you spend working on particular tasks, but it also gives you comprehensive reports that tell you exactly what you are spending your time on.

The Eisenhower Matrix is also very easy to use. All you need is paper, a pen, a ruler, and your to-do list. Alternatively, you can find an app that will help you to create a matrix electronically.

All you need to do now is place your tasks in the appropriate box, and you have an efficient task management structure in place.

Try the Eisenhower Matrix for yourself

The Eisenhower Matrix  helps you view both your long-term goals and your to-do lists through this prism. This will help you prioritize your days, weeks and even your longer timeframes more strategically and effectively. So if you have a growing list of goals and tasks, drawing an Eisenhower Matrix is a great place to start. Try it as you start the New Year and see if you get a better handle on things.

5 Steps To Increase Your Productivity With Timeboxing

Have you ever had that 30-minute task that spins out of control and takes up a whole day’s work? Happens to most of us at some point! When you don’t set any constraints on your time, it’s easy for work to expand and fill up your entire day.  Let’s say you allocate a week to complete a task. Even if you could finish that task in less time, you’ll find your work expanding so you actually take up the whole week to complete it.

You find yourself wasting valuable time and reducing your productivity. If you’re looking for a reliable solution to that, it’s time you tried timeboxing.

So, what is timeboxing?

Timeboxing is a time-management technique that involves setting a fixed unit of time (a timebox) to complete a particular task. The concept was introduced by James Martin, as a part of agile software development. Managers have been using it in project management for some time now, with great success. And now, with the shortcomings of traditional to-do lists becoming more apparent, more corporate workers are jumping on the timeboxing train to increase productivity.

With timeboxing, you allocate specific time periods to put a limit on activities that you feel would otherwise take too much of your time. The time management technique of timeboxing involves 5 steps:

Increase your productivity with timeboxing

Marc Zao-Sanders, CEO and co-founder of filtered.com, found that his productivity has at least doubled since he switched over from traditional to-do lists to timeboxing. How then, can you use timeboxing to increase your productivity?

You can make timeboxing much easier with the right tools. You can help your sales reps take their schedules back with timeboxing.

Help your employees set up specific tasks and track their time easily to understand how and where their bottlenecks are. Get your managers to use the extensive reporting to mentor the people in their teams.

Try our time tracking product for your people today and help make your teams more efficient and productive.